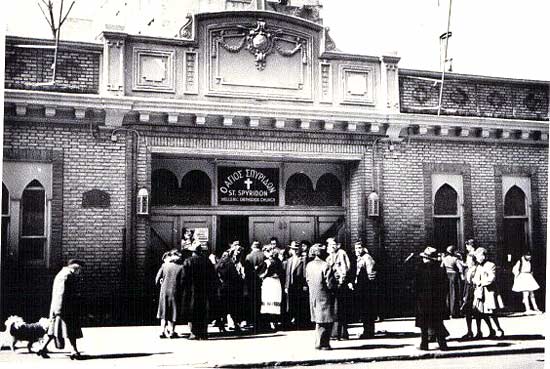 Parish Clergy: 1929 to the Present

The History Of Our Community: 1931 To The Present

While officially incorporated by the State of New York on June 25, 1931 under the name “Washington Heights Hellenic Orthodox Church, Inc.,” Greek Orthodox faithful residing in upper Manhattan had attempted some years earlier to organize a parish. Services were held in various locations by the Rev. Kanellos Kanellopoulos and the Church was known as Pantanassa - the Virgin Mary. It was not until the assignment of the Very Reverend Archimandrite Vaselios Lokis in 1931 that the church was organized and named Saint Spyridon Church. The certificate of incorporation was signed by Nicholas Botsakis, Otto D. Prounis, Marcos Yampanis, George Papaeleas, Evangelos A. Negris and Socrates Angelson. 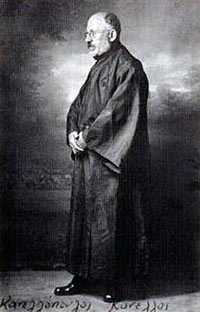 The faithful congregated at first in a small hall above a theater located on St. Nicholas Avenue at 185th Street. Later, they met in a room above a garage on 183rd Street east of Broadway. Holy Rood Episcopalian Church on 179th Street and Ft. Washington Avenue made available an auditorium for use by our parish.

During a general assembly meeting in September 1934, Anthony J. Miller was elected chairman of a real estate committee and was charged with the responsibility of acquiring a permanent location for the community. Within weeks they succeeded in securing a building located on our present property. Originally constructed in 1928 as a Baptist Church, it was subsequently sold and used as a Masonic Temple. The terms of the transaction called for the renting of the building for a period of three years, with an option to buy at a cost of $50,000. In grateful recognition of his leadership, Mr. Miller was unanimously elected president of the community in December 1934. Others elected to the parish council were Michael Goulandris, George Eliades, Ayisilaso Papachristou, John Staikos, Pierre Psillas and Jason Chios. 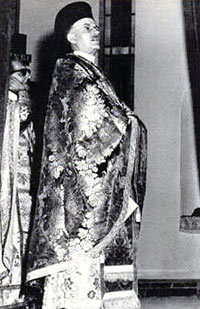 The first Divine Liturgy was celebrated by Archimandrite Lokis in January 1935. The church was consecrated in March of the same year by Archbishop Athenagoras (later to become Patriarch of Constantinople). During the services, Paul Coufos had the distinction of serving as Godfather of the community. In 1936 Rev. Lokis was named Dean of the Annunciation Cathedral in San Francisco. The Rev. Archimandrite Chrysostomos Papalambrou (later titular Bishop of Mirinis) was assigned as pastor. In September of the same year, the purchase of 124 Wadsworth Avenue was finalized. The parish continued to thrive. By 1937 Saint Spyridon Church grew to become one of the largest communities of the Archdiocese, supported by 850 members. It was reported at a general assembly meeting in November 1942, that membership had increased substantially and the Sunday School, with 600 students, was the largest in the entire Archdiocese.

During the Great Depression, the Rev. Deacon Theodoros Kokkinakis (later to become Bishop of Boston and Archbishop of Great Britain) was assigned to the parish. To better understand the financial hardships facing the parish during the depression, Rev. Kokkinakis served as deacon, chantor and secretary of the parish - all for the salary of  $90 per month!

The 1940s were active years at the community - especially for the young adults. The E.O.N. (Elliniki Orthodoxos Neolaia) was divided into four large groups - Sigmas, Deltas, Alphas and Omegas. Boy Scout Troop 725 was founded in 1945. The Greek American Youth Group (G.A.Y.S.) was established for young men and women 19-27 years of age. Over 275 students were attending the various sessions of the Greek Afternoon School. During these years, the question of where a new church and community center should be built was once again discussed. Among the many sites considered were 186th Street from Broadway to Bennett Avenue, 185th Street and St. Nicholas Avenue, and Ft. Washington Avenue, across from St. Elizabeth Hospital. The consensus of the parishioners was for the community to remain at the 124 Wadsworth Avenue location and for additional property to be purchased adjacent to the existing building, upon which a new church could be constructed.

In 1947 a catastrophic fire destroyed the existing church, but within a few months it was renovated. Shortly thereafter, two buildings, 653 and 655 West 179th Street were purchased. In 1949 the architectural firm of Kokkis and Lyras submitted plans for a new church complex, one that would become one of the most magnificent Byzantine churches in the world.

The 50s: The Great Dream: A New Church And School

The community had now reached a most crucial juncture in its history. After many years of preparation, the community was ready to proceed with the construction of the new church. Archbishop Athenagoras decided to appoint Archimandrite Lokis once again as pastor of Saint Spyridon Church. An eloquent preacher and a man of vision, Fr. Lokis worked zealously for the realization of the great dream. Serving as his assistant priest was the Rev. John Psillas, a newly ordained priest who was raised in the community.

God blessed the community with two great benefactors, Theodore P. Tsolainos and Constantine Goulandris who, inspired by their beloved mothers, contributed over $300,000 toward the completion of this great undertaking. 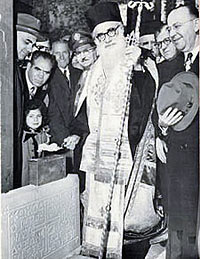 The cornerstone was laid in 1951 by Archbishop Michael and construction began on one of the most magnificent churches in the Orthodox world. During construction, the parish used the facilities of the Ft. George Presbyterian Church. Saint Spyridon Church was officially opened on September 7, 1952 in a most beautiful Thyranoixia Service (Door Opening) celebrated by Archbishop Michael. It was during the presidency of Mr. Tsolainos that the interior decoration of the new church was undertaken. He personally traveled to Greece to supervise the entire project. The beautiful, handmade iconostasion was purchased at a cost of nearly $17,000. The Bishop’s Throne and the Pulpit were purchased shortly thereafter thanks to the generous donations by several parishioners. The renowned iconographer, George Gliatas, was commissioned to do the Byzantine artwork. He was assisted by Constantine Yioussis.

Late in 1953, Archimadrite Lokis suffered a heart attack while working in the church and died shortly thereafter. With the passing of this great spiritual leader, another era of our community had come to an end. 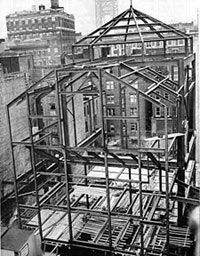 In June 1955, the Rev. John Poulos was appointed as pastor. He was a most enthusiastic leader, and it was during his ministry that the preparations for the consecration were made. The long-awaited blessed day arrived on May 4, 1958. The memorable service was attended by thousands of the faithful.  In September 1958 the Rev. George Roussos, pastor of Saint. George Church in Philadelphia, was appointed pastor of Saint Spyridon Church. His rich educational and pastoral experience greatly contributed to a most successful ministry.

It was during his pastorate and the presidency of George Mikroulis that the community built its Parochial School. Thanks again to our great benefactors, the dream of providing a school for the community where our young men and women could learn their Orthodox faith and cultural roots became a reality. On Palm Sunday, April 26, 1959, Archibishop Iakovos, in the presence of a large congregation, officially opened the Saint Spyridon Parochial School. In recognition of their generous donations, the parish assembly named the school “The Theodore P. Tsolainos - Constantine P. Goulandris Parochial School.”

After the appointment of Fr. Roussos, Archbishop Iakovos assigned the Rev. Alkiviadis Calivas as pastor. During his ministry, Fr. Alkiviadis provided dynamic leadership. Together with Rev. Constantine Xanthakis and later Rev. George Matsis and Rev. Theodore Stoupis, Fr. Calivas labored tirelessly for the benefit of the community. Among the many projects undertaken were the complete renovations of the church hall, offices and the installation of air conditioning in the church. 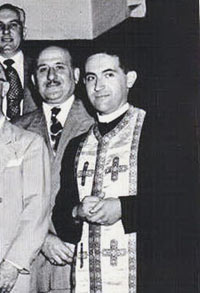 In 1976 Fr. John Psillas returned to Saint Spyridon Church as the pastor and assumed the spiritual leadership of the flock. Fr. John was no stranger to the community, and his four years were characterized by much activity and progress. All facets of his ministry were crowned with success. It was during his pastorate that the community purchased the building at 621 West 179th Street and was then able to renovate the interior of the church.

Saint Spyridon Church became the largest parish in the United States with over 800 members. The Saint Spyridon School graduated hundreds of students, many of them accepted into New York City’s specialized high schools and later secured prominent positions in their respective careers.

But by the late 70s early 80s, it was obvious that Washington Heights, along with many other neighborhoods in New York City, was undergoing a dramatic transformation that would have a profound effect on the community. Many Greek families that called Washington Heights their home were now moving to the suburbs where newer Greek Orthodox communities were built to serve those parishioners. Saint Spyridon Church, like many other inner-city parishes, saw the number of parishioners decline dramatically. In spite of this, the community continued to serve the needs of its parishioners, while at the same time, searched for a new role for itself in the coming 21st century. 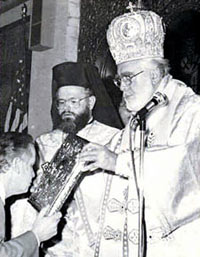 With the reassignment of Fr. Psillas, Archbishop Iakovos appointed his Archdeacon, the Rev. Methodios Tournas (now His Eminence Methodios of Boston) as the community’s new pastor. It was during his pastorate that three additional buildings were purchased across the street from the church. In 1981 Fr. Methodios led the 50th Anniversary Celebration of Saint Spyridon Church. Archbishop Iakovos celebrated the special service, attended by hundreds of current and former parishioners. Hugh Carey, then Governor of the State of New York, along with other dignitaries, attended the 50th Anniversary banquet.

After Fr. Garaboa’s departure, the community was served by several interim pastors, which included the then Archimandrite Evangelos Kourounis (now His Eminence Metropolitan Evangelos of New Jersey), who was raised in Saint Spyridon Church and who also graduated from its parochial school.

Rev. Constantine Combitsis, a well-respected clergyman in the New York area, was assigned to Saint Spyridon Church in late 2001. An energetic and enthusiastic leader of the community, he helped spearhead the 75th Anniversary Celebration of the community in 2006, an event that honored a new great benefactor of the church, Dr. P. Roy Vagelos. Due to his generosity, the church was able to install a new HVAC system. Dr. Vagelos’ generosity also allowed for the extensive work done to the exterior of the church and school, including pointing and cleaning of the stone and the installation of a new roof. In late 2006 Fr. Combitsis was then reassigned to Saint Gerasimos Church in Manhattan.

From 2006 to late 2015, Fr. George Passias served the Saint Spyridon Church community. During that time, Mrs. Jean Milanos gave a generous donation toward the installation of an elevator.

In December 2015 a new Parish Council was formed. Some of these members included grandchildren of the founders of the church. With the assistance of Fr. Evagoras Constandinidis, in April 2016 the Parish Council undertook the much needed and ambitious task of the complete restoration of the interior of this exquisite Byzantine church.

In June of 2017, Saint Spyridon Church welcomed a new Proistameno, the Rev. Nicolas Kazarian. Presently, Washington Heights (also known as Hudson Heights) is undergoing a transformation once again. With its easy access to midtown Manhattan, a renowned medical center, new restaurants and dramatic parks overlooking the Hudson River, the area is considered one of the most popular neighborhoods in the city. It is becoming home to a new generation of young families and professionals of all faiths. The Church’s commitment to the community continues, while it evolves to meet the needs of its parishioners in the 21st century.